National Wolf Awareness Week was created in 1966 to highlight the importance of wolves in the environment. This week, we will be spotlighting the natural history and conservation efforts that are in place to protect red wolves and gray wolves.

Wolves are “apex” predators, meaning they are the top predator in their environment. Apex predators contribute to a healthy ecosystem. Wolves, the largest members of the canine family, hunt in specialized packs. They have the unique ability to communicate using body language such as facial expressions, body posture, and tail positioning. Wolves help keep deer and elk populations in check, which benefits many other plant and animal species. The carcasses of their prey also help redistribute nutrients and provide food for other wildlife species. Scientists are just beginning to fully understand the positive ripple effects that wolves have on ecosystems. 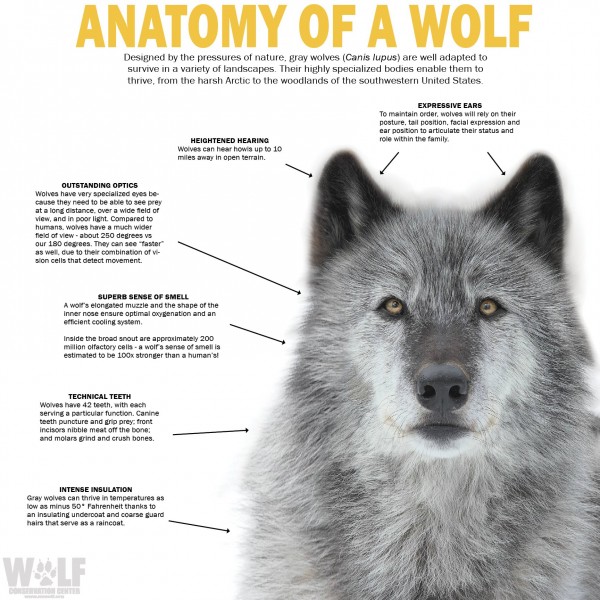 Gray wolves (Canis lupus) were once widely distributed across North America, but over the centuries they were all but exterminated by their biggest predator, humans, and disappeared from the lower 48 U.S. states. The gray wolf was among the first species placed on the U.S. Endangered Species Act List in 1973, and it made a successful comeback in some areas due to strong conservation efforts. Today the U.S. population is about 18,000, more than half of them in Alaska. In October 2020 the Trump administration removed gray wolves from the Endangered Species List, allowing widespread hunting and sparking concerns that without federal protection, they will once again face extinction.

To learn how you can help, please visit: https://defenders.org/wildlife/gray-wolf 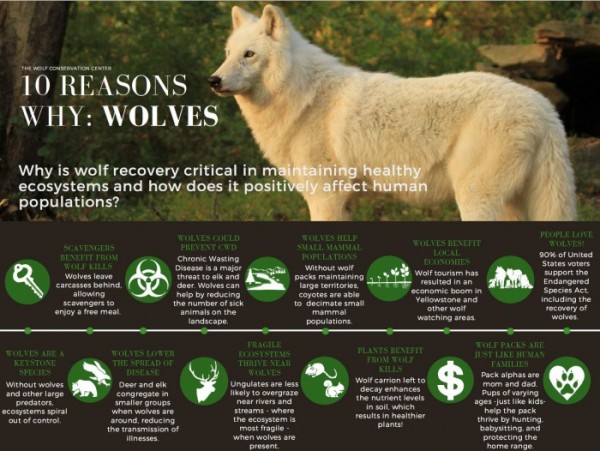 The Rosamond Gifford Zoo is home to three gray wolves, Romulus, Remus, and Silvia. They can be seen year-round in their wooded habitat along the Wildlife Trail. Our team named them for three characters in Roman mythology, the twin founders of ancient Rome and their mother, Silvia. Like all wolf species, our trio has an established pack order. Romulus, all white and the largest of the three, is the top dog. Next in line is our all-white female, Silvia. Remus, the one with the most charcoal coloring, is at the bottom of the pack.

Our carnivore team respects this hierarchy in caring for our gray wolves. As our large canines are nearly 10 years old, they are entering their geriatric years, so they receive daily supplements for joint health. The team presents these in tasty meatballs tossed in order – “Romulus, then Silvia, and then Remus,” says Carnivore Manager Seth Groesbeck. “If the more dominant wolves don’t get theirs first, they won’t let Remus take his,” Seth said. If you’ve ever tried to distribute Puppachinos to three dogs at once, you get the picture! 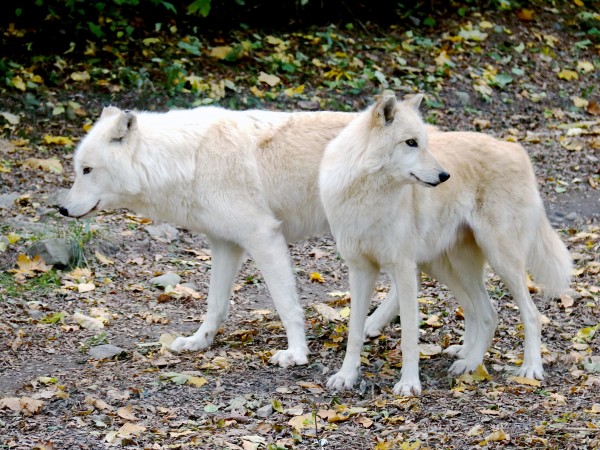 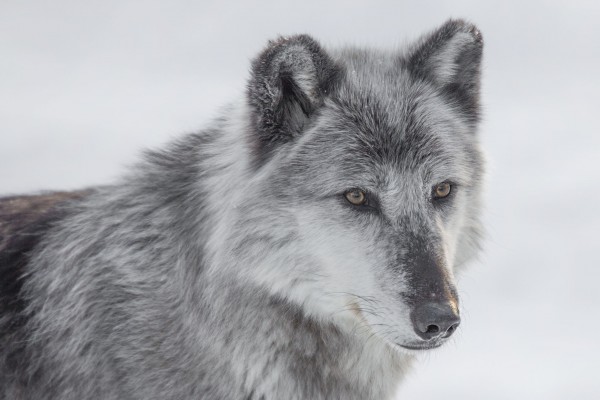 The most critically endangered species of wolf is the red wolf (canis rufus). A distant relative of both the gray wolf and the coyote, red wolves were once common throughout the southeast U.S. but were decimated by the 1960s due to aggressive “predator control” programs and loss of habitat. After being declared endangered in 1973, 14 wild red wolves were captured to start a captive breeding program that became the Red Wolf Species Survival Program.

By 2007, the red wolf SSP had released enough captive-bred wolves to bring the wild population up to about 150 in a protected North Carolina recovery area. But in recent years federal protections relaxed and the population plummeted, mostly due to poaching. Fewer than a dozen red wolves remain in the wild, while about 240 reside in human care at 41 SSP breeding facilities -- including the Rosamond Gifford Zoo! You can aid Red Wolf conservation by supporting these facilities. 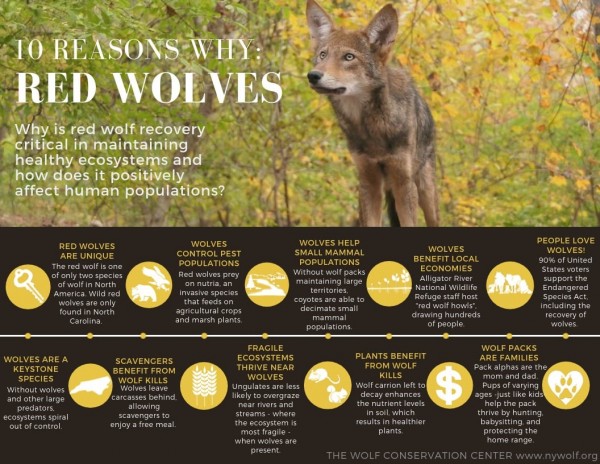 Our zoo is home to a pair of critically endangered red wolves: Cheyenne, age 7, born at the Wolf Conservation Center in South Salem, NY, in May 2014, and Waya, 5, who came to use from Zoo Knoxville to be introduced to Cheyenne in 2019. The pair has since bonded and can be seen year-round in their habitat on the Wildlife Trail -- although with some difficulty in warmer months due to their awesome camouflage!

The Rosamond Gifford Zoo is among 41 breeding facilities in the Species Survival Plan for red wolves, whose wild population numbers about 10. There are some 240 in human care, some of whose offspring could be released into the wild if federal protections are strengthened. While almost every animal in our care receives frequent training to bond with their keepers and participate in their own health care, our red wolves are a “hands-off” species due to their extremely fragile conservation status. As a result, they are among the “wildest” animals at the zoo. We are hopeful Waya and Cheyenne will produce pups and help boost the population of these beautiful animals! 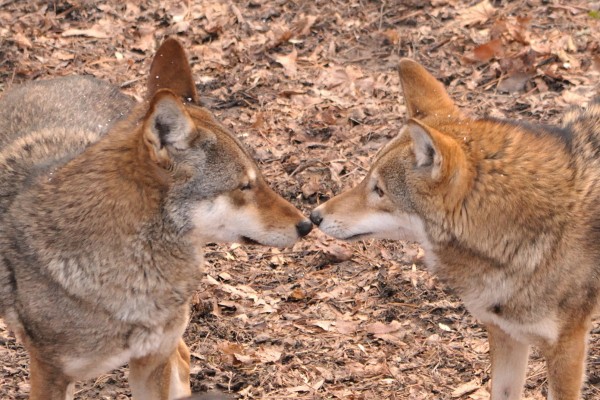 In 2020, gray wolves were de-listed from the Endangered Species Act, making them fair game for hunting in the few U.S. states where they have regained stable populations. You can learn more and sign a petition seeking restoration of their endangered status at: https://earthjustice.org/tags/wolves.

In recent years, the U.S. Fish & Wildlife Service has been loosening protections of red wolves, allowing the number of wild red wolves re-established in a North Carolina preserve to plummet, with fewer than 10 remaining. It will be up to the red wolf Species Survival Plan – which includes the Rosamond Gifford Zoo – to keep this species from going completely extinct. Learn more, including how you can help, at: https://www.aza.org/connect-stories/stories/saving-the-endangered-american-red-wolf 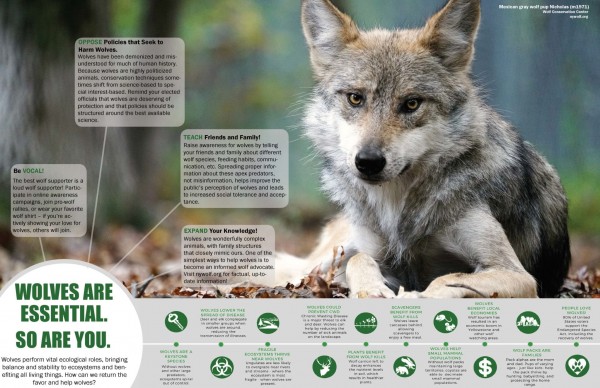 Posted in Mammals;
Posted 9 months ago
by Rosamond Gifford Zoo
<