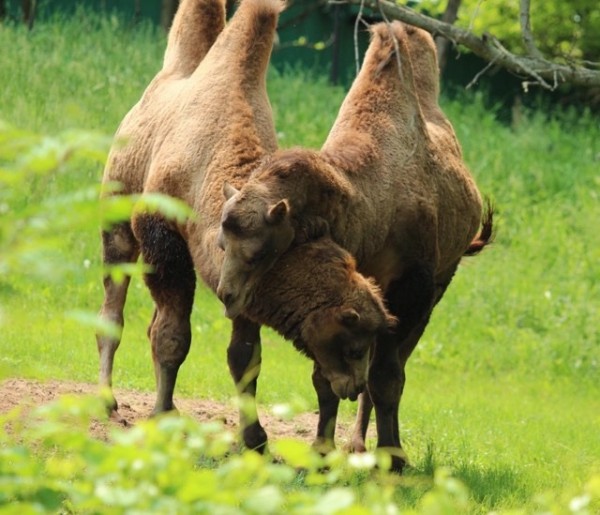 June 22 is World Camel Day! We are celebrating our two Bactrian (two-humped) camels, Patrick and George!

Bactrian camels are native to the Gobi desert in northern China and Mongolia. This desert has a wide variety of terrain ranging from rocky mountain areas and high sand dunes to washed out areas and extremely arid desert. It is a very harsh place for animals to exist and it is amazing that these camels have evolved to live in such harsh conditions. They can tolerate temperatures in their native environment in excess of 100 degrees Fahrenheit all the way down to negative 40 degrees!  Bactrian camels have several adaptations that let them survive in these extreme environments, such as, large flat feet that act like snowshoes in snow and sand, and the ability to close their nostrils to keep out sand.

Contrary to popular belief, camels do not store water in their hump. Instead, their humps are filled with fat that can be used to keep them alive for several months when food is scarce. Bactrian camels have an amazing ability to store up to 250 percent of the normal amount of water in their blood stream!  When they find water, they drink as much as they can and the excess water is stored in their red blood cells. They have thick winter coats in the winter that they shed in the summer, which makes them perfectly adapted for our Syracuse climate!

Here at the zoo we have two Bactrian camels named Patrick and George. They are half-brothers that came to us from the Milwaukee Zoo at the age of 6 months.  Patrick is older than George by 2 months and has the typical big brother attitude -- he investigates new things before his younger brother and is the more dominant of the two. The brothers weighed around 600 pounds when they initially arrived at the zoo, and now weigh 2,000 pounds at the age of 4!

Our camels voluntarily participate in their own husbandry. Through the use of operant conditioning, with a heavy emphasis on positive reinforcement, our camels are trained to perform multiple behaviors. Those behaviors range from lifting their feet for foot care to participating in voluntary blood draws. Training behaviors such as these lets the keepers and the veterinary staff provide the best possible care for the camels!

One of the best parts of the keeper’s day is the daily grooming session! This involves brushing out the camels' coats to remove any shedding hair. The camels are also bathed at least once a week. During these daily sessions the keepers also inspect the camel’s feet to make sure there are no foreign objects stuck in their pads, and their nails are healthy. The keepers also look in the camels mouths to check their oral health.

The International Union for the Conservation of Nature (IUCN) has listed the wild population of Bactrian Camels as Critically Endangered. Camels were domesticated about 4,000 years ago and while the numbers of the domestic population are very healthy, there are fewer than 1,000 wild Bactrian camels in existence.

Domestic Bactrian camels are often used as pack animals and can carry large loads.  Wild Bactrian Camels have much less hair than the domestic version, as well as much smaller humps. Much of this is due to the harsh conditions in the wild, it is much more difficult to maintain levels of fat reserves in the body which are stored in the humps.  Wild camels face many other hardships. They are losing territory to mining operations. They are also hunted for meat and because they compete with domestic dromedary camels for food sources. All funds earned from our raffles today will go to support the Wild Camel Protection Foundation. They have established a natural reserve in China for the dwindling population of wild Bactrian camels there.