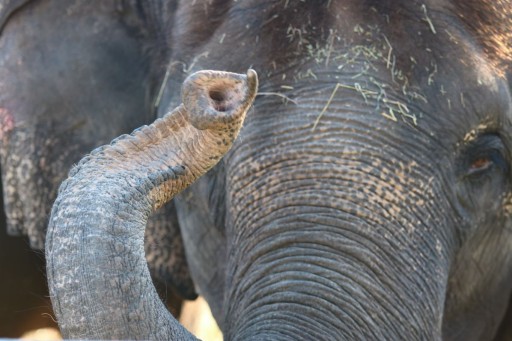 Not only do our amazing ambassadors educate people about their critically endangered species, the Rosamond Gifford Zoo’s Asian elephants are actively engaged in scientific research that will directly benefit their wild counterparts.

When Asian elephant Kirina sees her caregivers wheeling a certain cart toward her stall in the elephant barn, she knows what to do. After months of training for a study of elephant cognition, Kirina knows she’ll be asked to play a cognitive game in exchange for her favorite treat, marshmallows.

In the past year, Kirina and her herd-mates have collectively seen the research cart roll up hundreds of times, according to the scientist behind the study, animal behavior researcher Matthew Rudolph. Each time is an opportunity for the elephants to provide data on elephant cognition for Matthew to record in his study.

Once data collection is done, Matthew, a graduate student at New York City’s Hunter College, will spend time crunching numbers and coding observations for a scientific paper on how elephants see the world – or rather, how they smell it.

“At the zoo and in the wild, elephants encounter new things every day – new smells, new enrichments, new sounds – and what we learn about how they process this information can help us protect wild elephants,” Matthew said. “Learning how elephants perceive their world will ultimately help us devise more effective conservation strategies for them in the wild.”

Matthew’s work with our elephants is part of a fascinating body of research being conducted by the Comparative Cognition for Conservation Lab, or CCC Lab, at Hunter College and The Graduate Center.

There and at sites around the world, Dr. Joshua Plotnik and his team of Ph.D. and Masters’ students are studying the evolution of complex cognition across a range of species – from elephants and giant pandas to pangolins and turtles -- and asking how behavior and cognition can apply to endangered species conservation.

Among their study subjects are Asian elephants, for good reason – they are known to be highly intelligent, they are in grave danger of extinction in the wild and one of their greatest threats is human elephant conflict, a potentially solvable problem but one that has not really been explored from the elephants’ point of view.

Until now. The term “human-elephant conflict” describes the results of conflict among humans over how to deal with wild elephants in their range countries. For example, farmers in Thailand don’t want elephants eating their crops, but the government doesn’t want elephants being injured or killed. Outside organizations have their own ideas of how to intervene. The conflict among these different viewpoints means elephants face varying management techniques depending on who they interact with.

The situation worsens the more elephant habitat is cleared for agricultural use. Even after parts of their habitats vanish, elephants keep coming back in search of food, frequently causing major crop damage, devastation and conflicts that result in hundreds of fatalities annually – both elephant and human.

Conservationists and farmers in Thailand have tried many methods of “conflict mitigation,” including planting barrier crops to block their main crops from view, setting aside easement portions of their crops for elephants, interspersing hot chili peppers, and the old stand-by, electric fencing to keep elephants out. But sooner or later, an elephant will find a way in, and others will follow.

“Elephants are great problem-solvers because they’re so smart,” Matthew said. The CCC Lab began asking: how are elephants solving problems like getting through fences?

Research by Dr. Plotnik and team indicates it’s not with their eyes. While humans get most of their input from vision, elephants use their trunks and ears for most of their decision-making.

Our zoo’s collaboration with the CCC Lab began with a study on Asian elephant innovation and problem-solving. Ph.D. student Sarah Jacobson designed an elephant-proof puzzle box – a multi-access steel box with compartments the elephants had to figure out how to open to find food.

They found that, as Sarah titled her just published paper, “Persistence is Key” – meaning the most persistent elephants were most likely to innovate to open all the compartments.

Some of our elephants behaved predictably for their personalities, said Rosamond Gifford Zoo Elephant Manager Ashley Sheppard. The zoo’s eldest Asian elephant, Siri, “would solve the first puzzle right away, but as they got tougher, she would give up,” Ashley said, noting that Siri’s attitude is, “I like to do things on my terms.”

Also as expected, food-motivated Kirina would keep trying till she found the treat. But bull elephant Doc surprised the team with his persistence, Ashley said. “We figured that Doc would not be that interested, but he ended up wanting to participate,” she said.

In examining the data, researchers must take into account that elephants in our care have the luxury of being able to spend time persisting at a task – while wild elephants may not. But the upshot is, the most difficult elephants to “mitigate” could be the most persistent.

How might this apply to mitigation strategies in the wild? For one thing, it means that relying on the same solutions long-term won’t work with the most persistent elephants. “I would say, ‘Variety is key,’” Ashley explained. “This research shows that you won’t be able to use the same mitigation technique forever. You may have to keep changing it up. Humans have to be persistent, too!”

Dr. Plotnik suggested that individual elephants’ particular personality traits, and even groups of traits, can inform humans’ choices about which mitigation strategies to use and when.

“We do not yet know which personality traits correlate, but, just as an example, perhaps bold, innovative elephants that don’t fear novelty respond differently than shy, less innovative, more fearful elephants to particular mitigation strategies,” he said. “This, in theory, could mean that we could tailor mitigation toward, or schedule certain mitigation, for particular individuals.”

Ashley is listed as a co-author on the upcoming puzzle box paper, and the entire elephant team has been instrumental in Matthew’s current study of how their sense of smell plays a role in elephant behavior.

Matthew said the many months of working with them have made the RGZ elephant team his “second family.”

“The elephant team here is amazing,” he said. “They are as interested in the research as we are, and they are always making suggestions and working in partnership with us on what is a very time-consuming process. Their knowledge and expertise is the greatest resource we have. Together we devise strategies, overcome obstacles and bring these studies to completion.”

Zoo director Ted Fox said the zoo is committed to assisting with elephant research including efforts to develop a vaccine for EEHV, the deadly herpes virus that killed the zoo’s two youngest elephants in December 2020.

He said one of the most important findings of the CCC Lab is that no study will help elephants survive if it takes only the human point of view.

“As we learn more about elephants in our care and the ways we can help them be healthier, we also have to focus on stabilizing the lands in their native ranges so they can be protected,” Ted said, “Ultimately, we hope, by the people who live there.”

For more information on the Comparative Cognition for Conservation Lab, please visit ccconservation.org.