The Unique Function of HONEY BEES in Elephant Conservation 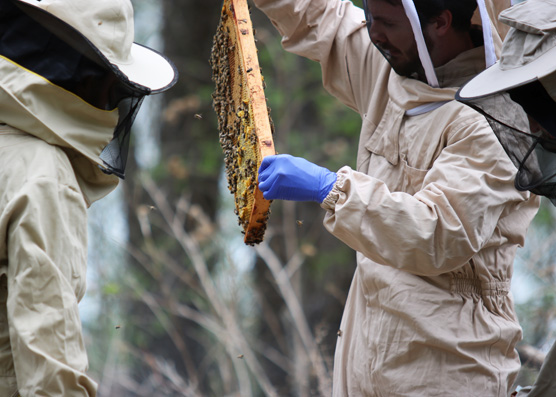 In May, the Rosamond Gifford Zoo embraced a new species – honey bees!

The new beehive is a short hike down a woodsy trail, off-exhibit behind the elephant barns. It sits on a pallet between a small pond and meadow – strategically positioned to be bathed in sunlight each morning but in cool shade by the afternoon. The hive looks like five white boxes stacked on top of each other. The bottom two are deeper than the others and contain the eggs the Queen Bee lays daily. The top boxes are shallower and hold the excess honey the bees make and store away.

Our singular hive is home to around 60,000 honey bees – the majority being female worker bees and only about 700 male bees. The male bees do not have stingers, nor do they assist with the upkeep of the hive. In the winters, they are shunned from the hive so that the collected resources can be rationed amongst the worker bees.

The only purpose of the male bees is to potentially mate with the queen once a year. Afterward, she can dictate not only the number of eggs she lays but the gender of the eggs as well. About 1,500 bees die naturally from old age every day and are removed from the hive by worker bees. They are immediately replaced by the 2,500 eggs the queen lays each day.

Beekeepers Cody Kautzman and Jessi McCarty, who double as zookeepers, met while attending Paul Smith’s College in the Adirondacks. Jessi, who has been beekeeping since the age of 15, started a beekeeping club on campus while studying Natural Reserve Conservation and Management. The club successfully built and kept five hives.

Cody, who studied Wildlife Science, was inspired by the beekeeping club, and carried his experience with him during his internship at the Rosamond Gifford Zoo in 2019. At the end of his internship, he wrote a proposal to bring honey bees to the zoo – a proposal that would be revisited two years later and put into action by our Animal Management Team and the Rosamond Gifford Zoo Chapter of the American Association of Zookeepers (AAZK).

“In my proposal, I shared how I believed the presence of a beehive would be an educational tool and resource about the importance of pollinators,” Cody said. “With the development of the hives, I saw an opportunity to host programs about bees, maybe even to teach people the practice of keeping honey bees.”

In addition to its educational role, the honey bee hive will have a unique function in elephant conservation.

Elephants are endangered partially due to the creature-human conflict that arises when elephants wander into farmlands for food. Elephants can eat an entire harvest in one day, and farmers resort to killing the animal in desperation to save their crops – their source of livelihood.

This is where the honey bees come in. Researchers have discovered that, despite being approximately 300 times the size of a honey bee, elephants are hesitant around bees and their nests. So, conservationists are using elephants’ respect of bees to help save their lives.

Studies show that elephants are deterred from wandering inside farmland when farmers place beehives around their property. These beehive fences are strung on wire, which sways when the elephants try to wander into the farmland.

The swaying disturbs the bees, causing them to swarm. While bee stings cannot penetrate the thick skin that covers most of the elephant, bees are smart enough to sting sensitive areas like its trunk, belly, mouth and eyes. And like bee stings hurt humans, they hurt elephants too. Ouch!

This conservation method is extremely effective, and benefits the elephants, farmers and bees.

“We’ve been working closely with the elephant keepers to study the connection between elephants and bees,” Jessi said. “We were able to feed the elephants some beeswax and saw they had an interesting reaction – they shook their heads and stepped away from the wax, almost acting with caution.” Elephants can sense the pheromones from the bees in the wax and take it as a warning there are bees nearby.

“The elephants can see the hive from their preserve and will often watch us when we inspect the beehive,” Jessi described.

The beehive sustains itself, so beekeepers only need to interact with the hive when they inspect the bees biweekly for diseases. Despite what you may think, Cody and Jessi have only been stung once or twice this summer!

“They only sting as a last resort,” Jessi explained. “Bees get a bad rap, but they are an intelligent and amazing species.”

Unlike commercial beekeepers, Cody and Jessi can slowly work with the bees, monitoring them for dangerous diseases and parasites. Through their observations, the beekeepers can learn more about bees and better ways to care for them.

While new beehives usually take a year or more to start producing honey, our hive has already produced 80-100 pounds of excess honey in only three months. Jessi attributes the fast development to the healthy variety of pollination at the zoo, along with good summer weather.

“It’s been a successful summer for bees this year in Central New York,” Jessi said.

And good thing too, because bees only have the warmer months to make honey from flowering plant life. Honey bees need about 90-100 pounds of honey to sustain them throughout the winter months. Jessi says they plan to leave their bees more than that, “just in case.”

While the Rosamond Gifford Zoo is not currently selling the honey produced, our catering team will be incorporating it into their unique food creations during events like our Fall Conservation Ball.

So, while you are at the zoo this fall, make sure to bee kind to our new pollinator friends! Visitors can catch a glimpse of the white hive from standing at the elephant outlook and looking towards the wooded area behind the preserve.

Conservation Conversations Episode 1: The Elephants and the Bees

Check out the resources below to learn more about honey bees and how they help protect elephants!