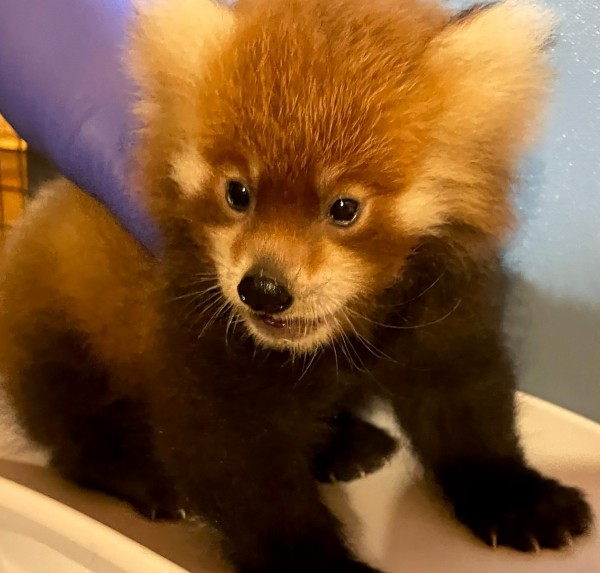 SYRACUSE, NY, November 3, 2022 – The Rosamond Gifford Zoo is excited to announce a red panda cub has been born at the zoo as part of a program to save the endangered species.

An adorable female cub was born to seven-year-old red panda mother Simone and ten-year-old father Ketu on July 31, 2022. This cub is a huge success to both the zoo and Simone, as it is her first successful birth since she joined Ketu at the zoo in 2018. Ketu has fathered several red panda cubs previously. The cub is also very important to the Species Survival Plan (SSP) as its unique bloodline provides genetic diversity for the species in managed populations.

“We are very excited about the birth of this very special red panda cub and proud of the animal care team’s dedication and commitment to the protection of endangered species,” said County Executive Ryan McMahon.

The birth of a new red panda is crucial for their endangered population. The birth comes after a breeding recommendation from the Association of Zoos and Aquariums Species Survival Plan, a highly strategic population management and conservation program designed to manage critically endangered animals.

“Red panda cubs are highly vulnerable, and the animal care staff followed a strict hands-off policy while Simone cared for and bonded with her baby,” said Zoo Director Ted Fox. “However, the team closely monitored the cub and her development through cameras installed in the nest box.”

Simone is a caring mother and did not leave the panda building for two months as she carefully attended to her baby.

After months of careful monitoring and anticipation, the red panda cub had its first health check in September. During the health check, the animal care team confirmed the cub was an extremely healthy female weighing 551 grams (about 19 ounces).

Red pandas are native to the Eastern Himalayas and southwestern China. They are slightly larger than a domestic cat and resemble raccoons with their bushy tails and face markings. Despite their name, red pandas are not related to giant pandas. They do, however, share similar bamboo diets.

Red panda populations are declining due to the deforestation of their nesting tree habitats, bamboo food sources, and poaching for their red coats. Their current estimated population in the wild is less than 5,000 individuals.

The new cub will remain at the Rosamond Gifford Zoo for at least a year as she matures but will eventually move to another zoo to participate in the SSP. Simone and Ketu will remain at the zoo, and their breeding recommendation will continue. The mother-cub duo will stay off exhibit until Simone and her cub is more comfortable and the baby becomes more mobile.

The zoo invites the community to help name the red panda baby through an online voting process. The link to vote and further updates on the cub will be announced on the Rosamond Gifford Zoo website and social media.