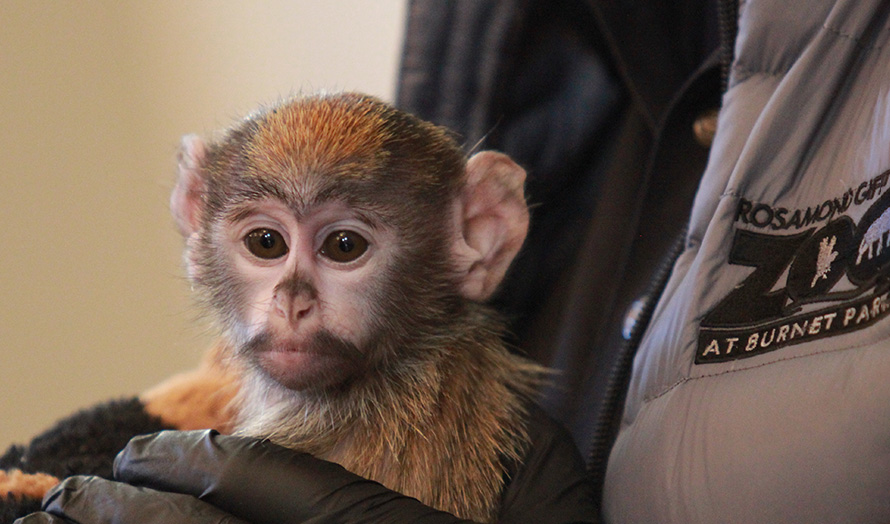 SYRACUSE, NY, September 18, 2020 — On Friday, September 18, the Rosamond Gifford Zoo introduced a baby patas monkey with a very unique story. Her name, Iniko, means "born in troubled times," not only because she was born during a pandemic, but also because her mother didn't survive the birth.

As a result, Iniko is the first baby patas monkey in the U.S. being hand reared in human care.

Iniko's mother, Becca, had three successful births in the past, but experienced a difficult labor with her. The zoo had to call in a specialist from Cornell University College of Veterinary Medicine to perform an emergency C-section to deliver the baby. Sadly, Becca succumbed and could not be revived. A necropsy found that she had renal failure and other health issues.

Without a mother to care for her, the baby patas monkey would have to be hand reared. The zoo's general curator, Dan Meates, and his wife, zookeeper Leisje Meates, had the experience to care for her in their home. They had to develop a special formula and took turns feeding her every two hours.

Iniko is now 3 ½ months old, and that's how long it's been since Dan and Leisje had a good night's sleep. In recent weeks they have been bringing Iniko to the zoo to acclimate her to a new environment. Zoo Director Ted Fox said the ultimate goal is to introduce her to her extended family of patas monkeys, known as a "troop."

Patas monkeys are African monkeys that form close social groups which make it a challenge to bring in a newcomer, especially a defenseless baby. Fox said zoo staff are hoping that the dominant female in the zoo's troop, Sarah, will take Iniko under her wing. Sarah loves babies but can no longer have any of her own. She has already shown great interest in Iniko (with a mesh barrier between them).

Zoo staff are closely documenting this experience and monitoring the baby's development to share with our fellow accredited zoos in the Association of Zoos & Aquariums. "This information will be important for institutions caring for this species and other related primates," Fox said.