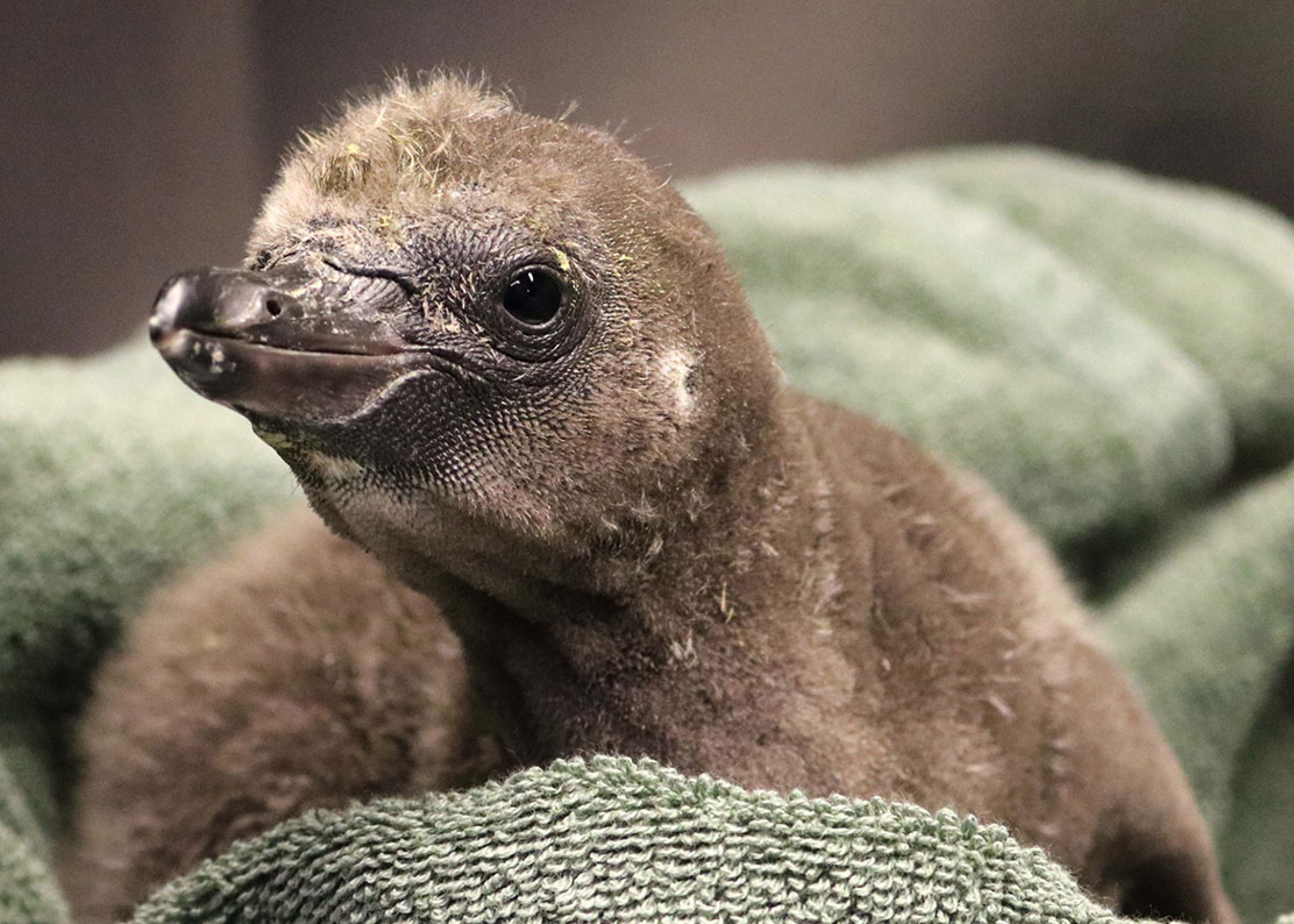 SYRACUSE, NY, January 28, 2022 — The Rosamond Gifford Zoo’s internationally renowned Humboldt penguin program is celebrating  its first chick to hatch from an egg cared for by a pair of male penguins who are now raising the chick together.

The new chick hatched on January 1 to Elmer and Lima, two adult male Humboldt penguins who formed a pair bond for the current breeding season. Elmer hatched at the zoo in 2016 and Lima in 2019. The zoo’s penguin colony has 28 birds.

The same-sex foster couple are a first for the zoo, which has relied on foster parents to incubate eggs in the past. The zoo has at least two breeding pairs of penguins with a history of inadvertently breaking their fertilized eggs. To give the eggs a better chance of hatching a chick, keepers may swap a dummy egg for the real one and give it to a more successful pair to incubate.

Last year, the zoo’s first penguin chick, Opal, was the biological offspring of parents Juan and Rosalita – one of the egg-breaking pairs – and reared by another pair, first-time foster parents Luis and Calypso, who incubated her egg and fed and cared for her after she hatched.

“It was their first time fostering and they really knocked it out of the park,” the zoo’s bird manager, April Zimpel, said at the time.

This year’s star foster parents are Elmer and Lima. The two males paired up this past fall for the current breeding season, built a nest and defended their territory -- so the penguin team decided to test their fostering capabilities.

“Some pairs, when given a dummy egg, will sit on the nest but leave the egg to the side and not incubate it correctly, or they’ll fight for who is going to sit on it when,” he said. “That’s how we evaluate who will be good foster parents -- and Elmer and Lima were exemplary in every aspect of egg care.”

On December 23, the team determined that an egg laid by female penguin Poquita and her mate Vente had a viable embryo inside. They decided to swap it for the dummy egg and give Elmer and Lima a chance to incubate it. The pair did a great job of taking turns incubating the egg until it hatched and have been brooding (warming) and feeding the chick since, Fox said.

“At our first health check when the chick was five days old, it weighed 226 grams (8 ounces),” Fox said. “It continues to be brooded and cared for by both Elmer and Lima, who are doing a great job. And once they have experience doing this and continue to do it well, they will be considered to foster future eggs.”

Fox said same-sex penguin pairs show that the idea of “family” is not species specific and that in many cases, non-traditional families do a wonderful job of child-rearing.

“Elmer and Lima’s success at fostering is one more story that our zoo can share to help people of all ages and backgrounds relate to animals,” he said.

Humboldt penguins are native to the Humboldt current off the coast of Chile and Peru in South America. They are listed as Vulnerable, with the wild population declining due to habitat loss and climate change.

The Rosamond Gifford Zoo joined the Species Survival Plan for Humboldt penguins in 2005 with the opening of its Penguin Coast exhibit. The zoo defied all expectations by starting its colony with 18 birds from other zoo and aquariums in the Association of Zoos & Aquariums (AZA) and producing chicks the very next year.

The zoo has since hatched more than 55 penguin chicks, many of which have gone on to participate in the SSP at other AZA institutions.

Fun Fact: Humboldt penguin Elmer is so named because the egg he hatched from was accidentally damaged by his parents and the animal care team repaired it using Elmer’s glue!