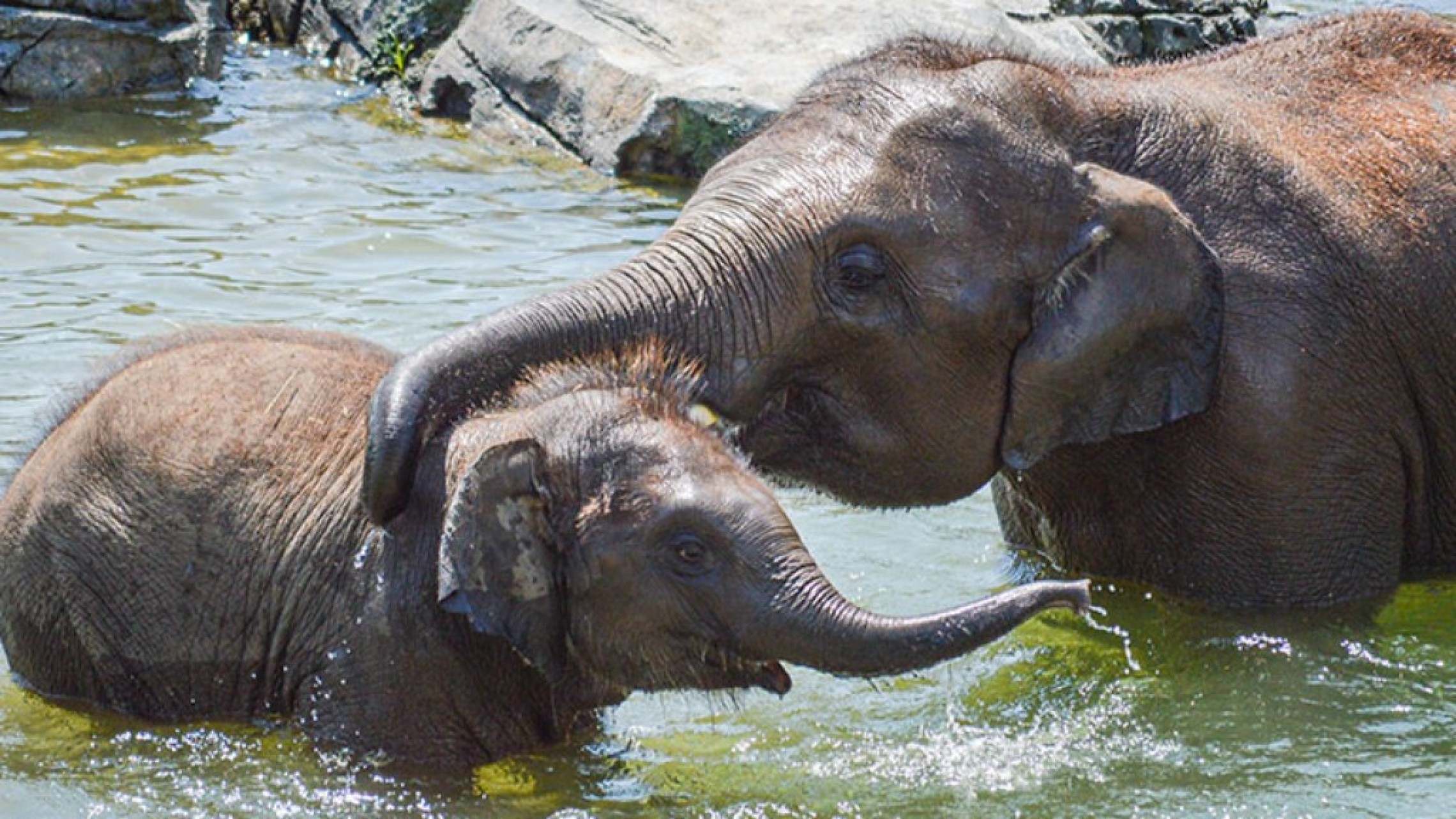 SYRACUSE, NY, December 17, 2020 — Along with hundreds of expressions of sympathy on the recent loss of our two elephant calves from Elephant Endotheliotropic Herpes Virus (EEHV), the Rosamond Gifford Zoo is also receiving many questions about our six remaining adult elephants and the future of our Asian elephant program.

The questions posted on our social media range from how Batu and Ajay’s parents, Mali and Doc, are doing after losing both their calves in a matter of days to whether the zoo will continue to work with Asian elephants in the future. We also are receiving many inquiries as to how the public can help honor Batu and Ajay and contribute to research on this deadly disease.

Here are some of the most pressing questions we have received and our answers:

How are Mali, Doc and the rest of the herd doing since Ajay and Batu passed? Are they in any danger from EEHV? Are they mourning like we are?

Our six adult elephants are all healthy, eating and exhibiting normal behaviors. We continue to take blood samples and “trunk washes” for EEHV testing, and all six are negative for all appropriate strains of EEHV. EEHV is believed to be dormant in most if not all elephants, both African and Asian, but young elephants are most susceptible to the virus becoming active while they are unable to fight it off. Most elephants that reach adulthood either survived the virus or developed immunity to it without showing symptoms. However, it could still strike an adult elephant whose immune system is weakened due to other factors – so all AZA zoos that care for elephants routinely test them throughout their lives.

As for mourning, we try to be careful not to project our own human emotions onto animals. What we can do is closely watch their behaviors for signs of stress. We can say with certainty that the adult elephants, especially Mali and her mother, Targa (the boys’ grandma), showed a significant change in behavior at the time of death for both Ajay and Batu, which we may interpret as grief. Whether they experience the loss days or weeks later is something we can’t know. We are keeping a close watch for any behavioral changes and giving them as much support as possible to make sure they’re OK.

How do you manage EEHV if it’s always a potential threat? Why didn’t you isolate Ajay or start treating him when Batu tested positive?

EEHV is not “contagious” in the same way other viruses like COVID-19 and the flu spread. Scientists believe most Asian elephants are born with or exposed shortly after birth to a dormant form of EEHV that may activate in the most vulnerable individuals – most often young elephants between ages 3 and 8, who are between weaning from their mother and developing adult immunities. We do routine bloodwork on the entire herd and we keep three days’ supply of herpes anti-virus medication on hand so we have enough to start treating any elephant in the event of a positive EEHV test.

We currently ship our blood samples to the Smithsonian National Zoo and Conservation Biology Institute EEHV Lab for testing, which takes about 24 hours. This is one of the few labs in the country that tests for EEHV. When Batu’s test came back positive on Thursday, December 3, we immediately began treating him with anti-viral medication as well as intravenous plasma, whole blood antibiotics, gastroprotectants and fluids – all the best treatments available at this time.

While we were concerned about Ajay and closely monitored him, we would not consider him to have an active infection without a positive test or symptoms. On the contrary, treating a baby elephant without those indicators could cause great stress, which is considered a major factor in triggering the virus to become active.

After such devastating losses, why continue breeding Asian elephants? Wouldn’t you be risking this happening again?

We consider it an enormous privilege to be part of a collaborative effort to save Asian elephants from extinction through a variety of efforts that include working with them on a daily basis and learning everything they can teach us, from birth to old age and in between. Asian elephants are critically endangered in the wild due to many threats, including EEHV. Our commitment to caring for Asian elephants requires us to participate in ongoing research projects to address the threats that are decimating this species in the wild.

Besides contributing to research on EEHV, our work with Asian elephants has provided valuable data on many other factors that may impact the survival of wild elephants, such as:

As one of 30 Association of Zoos & Aquariums (AZA) institutions that care for Asian elephants and one of only 11 approved to maintain a breeding herd, we also participate in a Species Survival Plan to maintain an “assurance” population in human care that could be essential in preserving the species if the native population were to crash.

At the same time, being able to have these amazing creatures in our midst allows hundreds of thousands of people who would otherwise never encounter Asian elephants to experience them and develop love and appreciation for a species that needs our help halfway around the world.

What can you do to make sure something like this doesn’t happen again?

On the global front, we can continue to support EEHV research by sending data and samples to the Smithsonian EEHV lab and others, Sand contributing financially to efforts to develop a vaccine to protect elephants from this deadly disease. We and other AZA zoos frequently contribute to this cause along with other elephant conservation initiatives. The Friends of the Rosamond Gifford Zoo has just pledged $2,500 to the National EEHV Lab in Ajay and Batu’s names.

Locally, it would be helpful to have EEHV diagnostic and treatment equipment on-site at the zoo. Before this happened, we already planned to outfit the new Animal Health Center now under construction at the zoo with $1.1 million in state-of-the-art diagnostic and treatment equipment, including a PCR (polymerase chain reaction) machine to test blood for EEHV, a centrifuge for extracting plasma for treatment and refrigerator units for blood and plasma storage. The cost to purchase this equipment and train staff to operate it properly is in the range of $125,000.

In light of the devastation EEHV caused here, our elephant team agrees that the fundraising efforts for this equipment should be dedicated to Ajay and Batu. The Friends of the Zoo has created the Ajay and Batu Memorial Fund to Benefit the Animal Health Center for this purpose.

Our wonderful community has already been reaching out asking what they can do to memorialize Ajay and Batu. We would ask that you make a gift to the Ajay and Batu Memorial Fund at www.justgiving.com/campaign/ajay-batu-memorial-fund in their memory.

Our heartfelt thanks to everyone who has reached out with sympathy, concern and a desire to help at this difficult time.

Posted in Friends of the Zoo;
Posted 19 months ago
by Rosamond Gifford Zoo
<