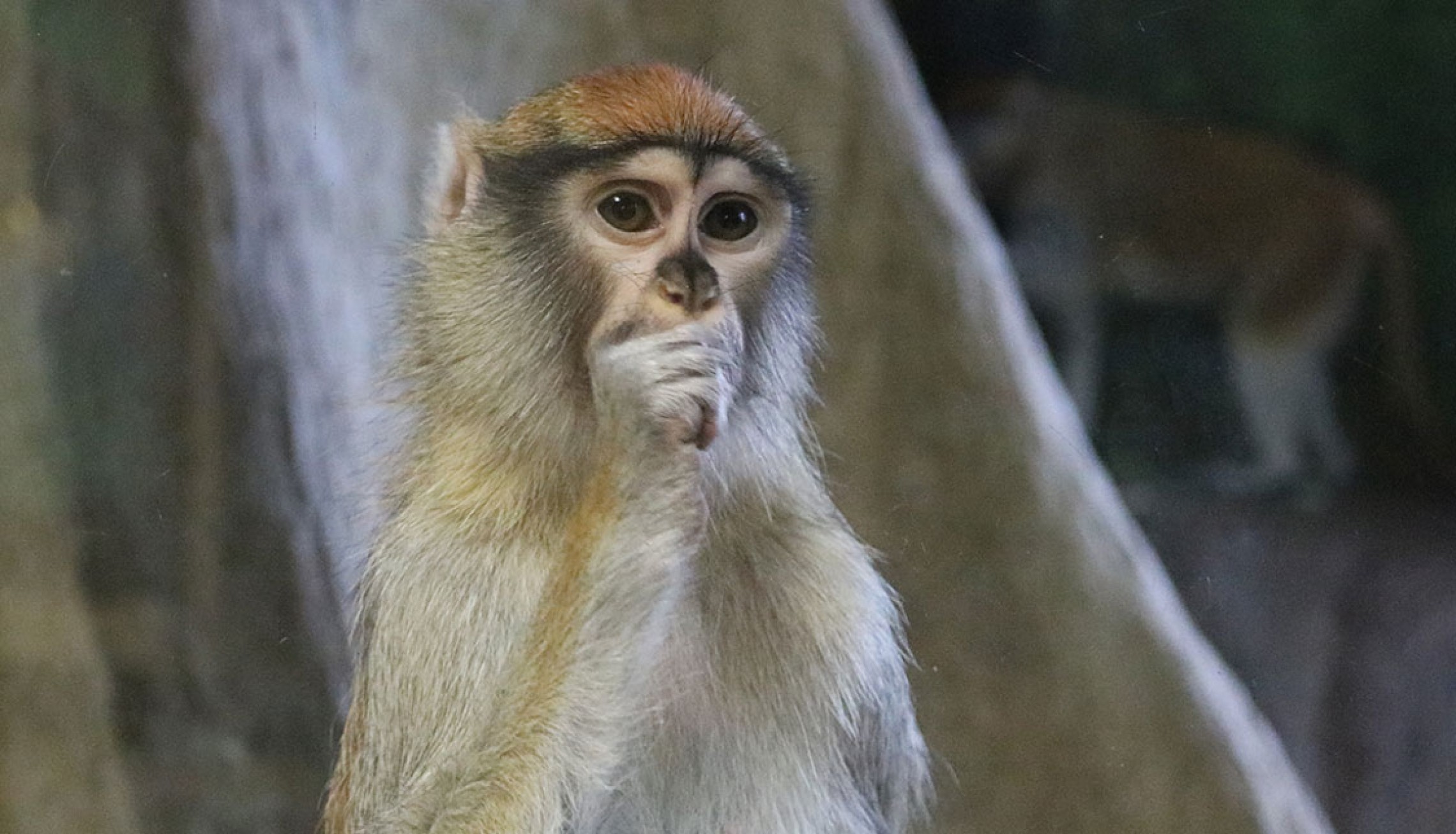 SYRACUSE, NY, January 5, 2022 — For the first six months of her life, she was fed and cared for by two human foster parents – both animal experts at the Rosamond Gifford Zoo. This week, patas monkey Iniko entered a large exhibit in the zoo’s Social Animals Wing joined by two patas monkey family members, the latest step in the zoo’s effort to integrate the first baby patas monkey raised in human care into her real family.

“Iniko has become full-fledged socialized patas monkey,” Zoo Director Ted Fox said. “This is something we’ve been striving for since the day she was born, lost her mother and had to be raised in human care. She has come into her own as a well-adjusted little monkey who has bonded with other members of her species.”

Iniko’s story began June 8, 2020, when her mother, Becca, went into kidney failure during labor and underwent an emergency C-section. When Becca didn’t make it, Zoo Curator Dan Meates opted to bring the baby home along with an isolette, bottle feeding supplies and determination to help the 12-ounce infant survive.

Dan and his wife Zookeeper Leisje spent the pandemic shutdown caring for the baby monkey as Central New Yorkers followed her story. They named her Iniko, a Nigerian word meaning “Born during troubled times.”

As they gleaned the minimal available information on hand-rearing a baby patas monkey, they learned it hadn’t been done before. They knew the big challenge would come when Iniko was weaned and it was time to introduce her into the social hierarchy of the zoo’s patas monkey troop.

Patas monkeys tend to form groups of all females led by a dominant male who keeps the peace. The patriarch at the zoo was MJ, the father Iniko never met. As the zoo team was starting to introduce Iniko to her peers through a glass barrier, MJ passed away due to an untreatable gastrointestinal ailment.

Without a lead male, it would be especially difficult for Iniko to join the troop. The zoo opted to hold off while awaiting a young male patas monkey from a zoo in California. Mac arrived on June 15 and spent a month in quarantine. By then it was clear they would need to split the group, at least temporarily, for the sake of all involved.

There were now four monkeys in the troop: older females Sarah and Addie and young females Kasi and Etta. Sarah, the dominant female, was losing her vision, but had strong bonds with Kasi and Etta, who served as her protectors. That left Addie on the outs.

The team decided the best course would be to try and group Iniko and Addie with Mac so they would have support and protection, Fox said.

“The most important thing was to introduce Iniko to Mac so she would have someone to protect her when they both interact with the other females,” he said. “Mac is young enough that he likes to play, so he and Iniko hit it off pretty quickly. Iniko figured out how much Mac likes to be groomed, so he solicits and she grooms him just like any patas monkey.”

The next step was to introduce Iniko to Addie through a mesh barrier. When that went very well, they let Addie in with Mac and Iniko. The trio can now be seen in the zoo’s lemur exhibit, while Sarah, Etta and Kasi remain in the patas monkey habitat.

Once the new Animal Health Center at the zoo opens, the team will have a space to introduce both groups in neutral territory, rather than give either group the disadvantage of entering the other’s turf.

This complicated situation has posed a steep learning curve for the zoo’s primate care team, and they have documented it from Day One to share with other Association of Zoos & Aquariums (AZA) accredited institutions around the world.

“What we have learned so far about how to successfully raise a baby patas monkey and what we are still learning about how to integrate her into her troop is of enormous value and shows what the best zoos can achieve that science could never accomplish in a field research setting,” Fox said.

“The information we have accumulated has implications not just for increasing what we know about patas monkeys, but similar species of Old World monkeys as well.”

Watching Iniko turn from a tiny, wide-eyed infant to a spunky little whirlwind to a young monkey interacting with other monkeys has been a special experience for everyone at the zoo, Fox said.

“To watch this transformation is amazing. Her troop will be able to provide her with what she really needs most, which is constant interaction and activity with other monkeys,” he said. “To see this very detailed plan, which involved so many of our dedicated animal care staff, come to fruition has become one of the zoo’s best stories.”